The peer-to-peer rental model is fragile. If you lent your ladder to someone and didn’t get it back, would you ever use the sharing economy again?

P2P startups live or die by good and bad participants.

Your friends are ideal borrowers and lenders. They value your friendship, so will look after your things. But do you have enough friends to find items to borrow nearby? The average Facebook user has 141 friends, and we can’t expect them all to become P2P lenders. However, factoring in their friends gives a pool of ~20,000 people (ignoring interconnectivity for now). Now there’s a real chance of finding nearby items offered by people we trust. When a user logs in with Facebook, StreetLend automatically identifies relationships in two degrees of separation: 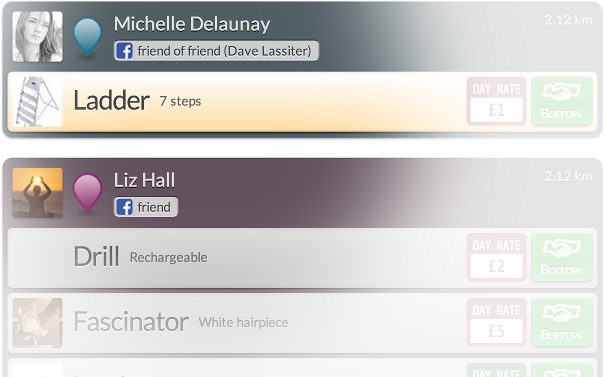 Neighbours outside your friend circle are still shown on StreetLend, and the choice is yours whether to deal with them. They won’t be untrusted forever. StreetLend now features an endorsement system that adds neighbours into your trusted circle after a successful lend. 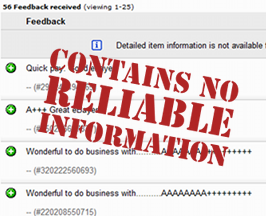 Ever seen the escalating battle of A’s and +’s in eBay reviews? Are they compensating for something? How valuable are reviews written by strangers? And what’s to stop people reviewing themselves?

Endorsements of lenders and borrowers are more believable when they come from your own circle of friends.

After a successful StreetLend transaction, the lender endorses the borrower with a simple click (and vice versa). Lender and borrower become connected, like friends, in StreetLend’s trust network. What started as 20,000 trusted people now grows further with each transaction, as StreetLend shares your endorsed connections with your friends:

With these new capabilities, StreetLend sets the benchmark for trust in the sharing economy. Two degrees of separation reaches a large network of trusted people, and we can finally trust online endorsements because they come from real-world friends.

Sign up with just a couple of clicks and put your unused items to work today: http://www.streetlend.com/

Controversial blogger Milo Yiannopoulous recently criticised the Sharing Economy concept, blaming it for damaging free markets (amongst other things). Here’s a debate I feel strongly about.

I left a career in finance to found StreetLend (a neighbourly rental website), and as a free market believer, let me address some of Milo’s points. Firstly:

How the sharing economy creates value

Take the example of a drill. On average, used for just twelve minutes in it’s entire lifespan. Capitalism (“the efficient allocation of capital”) isn’t about buying things that gather dust. It’s more efficient to buy the tools we need to own, and rent the rest.

A ladder has to be stored, which has an impact on the price the buyer is willing to pay. The ladder’s ability to earn money through lending adds value to the ladder. In both cases, the sharing economy raises the value of items in the primary economy.

By lending we’re buying less. How can that be good for the economy?

In a country like the UK where we import more than we export, consuming less is actually good for our national economy. The UK currently imports about £100bn more in goods than it exports. This huge trade deficit means money is being invested abroad rather than here in the UK, and foreign holdings of the pound are high, potentially destabilising its value.

A lot of things we use were designed in America, manufactured in China, and imported. Importing means selling the pound on the currency markets and buying yuan / dollars (in order that American and Chinese companies can be paid). Selling the pound devalues it. So whenever we import goods to the UK we devalue the pound, which makes subsequent imports more expensive. It also means our wealth pays tax in other countries.

By consuming less and re-focussing on producing goods and services that other people want we’re rebalancing. Home shopfronts online (Etsy, Shopify, eBay etc), the peer-to-peer service industry (TaskRabbit, Zaarly etc) and the maker movement means that everyone can become a national exporter, and play their small part in reducing the UK’s £100bn trade deficit.

The question is – what, and who is “business.” A neighbourhood rental site like StreetLend democratises the business of lending. Rather than a handful of businesses generating revenue from lending, now anyone with unused items can do so. It will undoubtedly hurt incumbent businesses, but their revenue is simply redirected into the pockets of individuals to spend in the wider economy. In fact, without the overheads of traditional business, the sharing economy focusses capital on the job in hand – rental. It’s simply more efficient.

Local rental will disrupt existing rental shops, just like AirBnB disrupts hotels. However, it won’t be disruptive to our economy. For reasons outlined above, I believe it will actually benefit our economy. Anti-capitalist? Not at all.

Ever needed a ladder for a day? 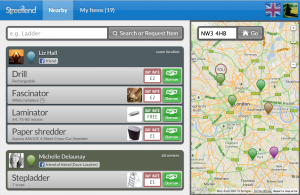 StreetLend is an online marketplace for sharing everyday items with neighbours and friends. 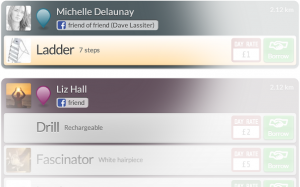 StreetLend has an advanced trust system that highlights your friends, their friends, and StreetLenders they’ve endorsed.

Looking to borrow something but don’t find it listed? Add a request, visible to nearby people, and you’ll get an email when the item is listed.

Security is important to us. There’s no need to reveal your address. Choose whether the borrower picks up the item, the lender delivers, or meet at a public place. For peace of mind, take a security deposit that covers the cost of your item. Pay by cash, or via your smartphone using the Barclays PingIt app (fee-free, instant, and works with any UK bank account).

Give StreetLend a try today – what will you lend?